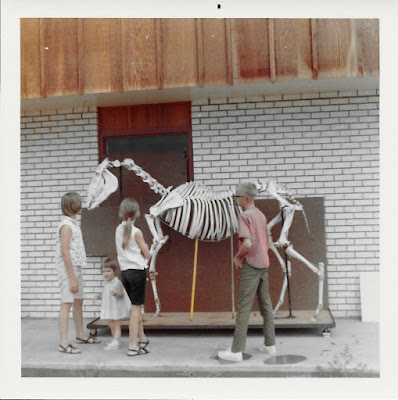 My siblings and I getting a first hand look at Snippy.

Any of us who lived in Colorado in the late 1960s will probably remember Snippy the Horse. I certainly do. I was ten years old in 1967 when the news of Snippy hit the air waves. Snippy was a horse that killed under strange circumstances – still strange to this day according to several articles. My siblings and I were fascinated by all the talk of UFOs surrounding the mysterious mutilation of poor Snippy.

We lived in southeastern Colorado and Snippy was from a farm south of Alamosa, Colorado, so it was close enough we heard a lot about it. Snippy, a three year old horse was found dead with all the flesh stripped from his head and neck. An autopsy revealed unexplainable missing organs. There were unusual signs in the field around him and several people throughout the area reported seeing what seemed to be UFOs during the days surrounding this event.

It seems there were plenty of official investigations but nothing conclusive ever turned up. Snippy’s body was autopsied and studied and eventually his skeleton became a tourist attraction. The pathologist that autopsied him shortly after he was found, said there were no signs of entrance in the body but the abdominal, brain and spinal cavities were empty.[1] This and the fact that high radiation levels were found in the area caused the University of Colorado’s Air Force sponsored UFO study to call in a nuclear physicist, a psychologist and an animal expert to investigate the area,  and talk with area residents about their UFO sightings.[2]

A few years later, a veterinarian who assembled the bones insisted that he found a couple of .22 caliber bullet holes in the hind quarter bones. Snippy spent a few years on the sidewalk in front of the Chamber of Commerce and according to the attached articles, was in a private museum for a while. She also spent years in an abandoned house somewhere before her bones were offered on eBay. The seller wanted $50,000 but an ownership dispute ended the auction.[3]

Poor Snippy – if only she could tell us all what really happened. As young children we were more than ready to believe in UFOs and spacemen.

Do you remember this story? What did you think? Have you heard other such stories? Let me know on the comments below.

Posted by Rita Schmidt Martin at 2:02 PM No comments:

Email ThisBlogThis!Share to TwitterShare to FacebookShare to Pinterest
Labels: Colorado

The LaJunta Mennonite School of Nursing was located in LaJunta, Colorado. It began as part of the Mennonite Sanitorium (a TB facility) in Swink, Colorado in 1915 with the first class graduating in 1918. When the new Mennonite Hospital and Sanitorium was built in LaJunta, the training school was moved as well. In 1946 it became an independent institution the had well over 300 graduates. The last class was the class of 1958. More about the school's history can be read on the Global Anabaptist Mennonite Encyclopedia Online (GAMEO) site.

My mother attended the school and graduated with the class of 1955. Her father's sister, Maude Egli Swartzendruber, was for a time, the director at the school and wrote about the school in her book, "The Lamp in the West."  Aunt Maude influenced a lot of young women, including Mom, to go into nursing.


Mom and Dad met while they were both attending Hesston College in Hesston, Kansas. After Hesston, Mom went to LaJunta for training and Dad went into alternative service (1W) with the selective service. He tried to get assigned to LaJunta; several young Mennonite guys were assigned there, including Mom's brother, Tom Egli, but Dad was assigned to Pueblo, Colorado. The next three years they dated long distance and wrote almost daily letters. Nursing students were not allowed to be married.

I don't know if all the nursing classes were as close as Mom's but I don't think any group could have been closer. They kept in touch through a 'circle letter' that came as a large packet of letters that Mom loved to read. Then she would take out her old letter, write a new one and send it off again. Every few years the group would get together for a reunion. We learned to know many of her classmates and their families over the years.

I was looking through old photos today and found this photo dated July 4, 1915. This is my grandmother, Edna Peterson Egli. She was 15 years old. With those stripes, I can't help but wonder if she was wearing red, white and blue? 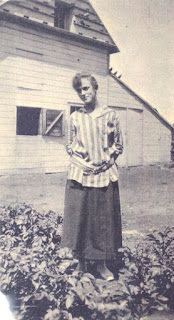 As I was looking through the file of photos of her, I came across one of her with a car. I knew she'd won a car in 1922 - I wrote about it in her bio which you can read here.

Although the notes I found about Edna say the car was a 1922 Ford, I found this picture of Edna with a car that may or may not be the one she won. The photo is dated 1922 but as you can see, the car is a Chevrolet. If you search the internet for pictures of 1922 Chevrolet, you will find some nice images of this car.  I would like to find a newspaper article from when she won the car - you would think there would be one since it was won for selling newspaper subscriptions. Anyone out there have access to 1922 Manson Journal? 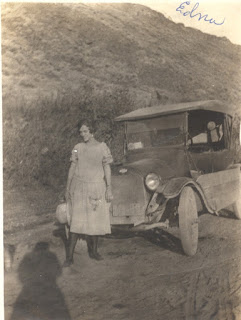 Posted by Rita Schmidt Martin at 3:43 PM No comments: 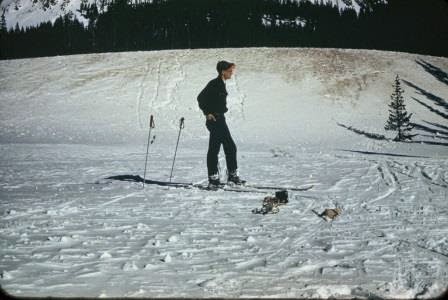 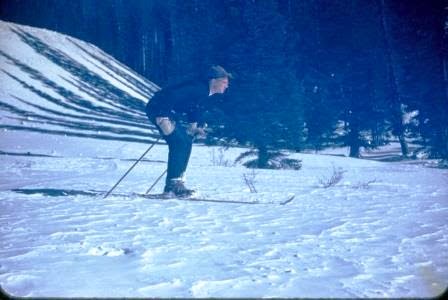 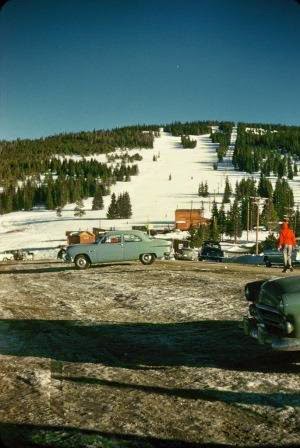 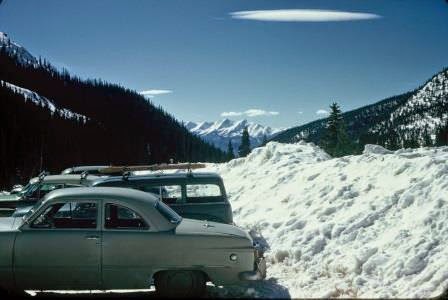 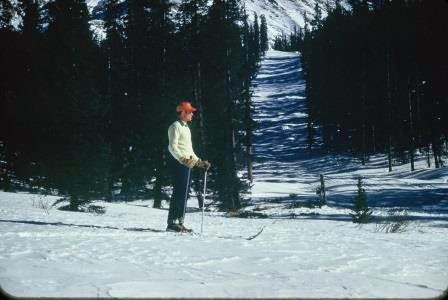 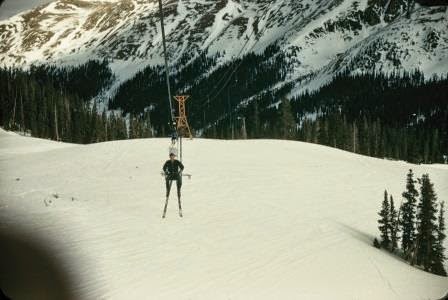 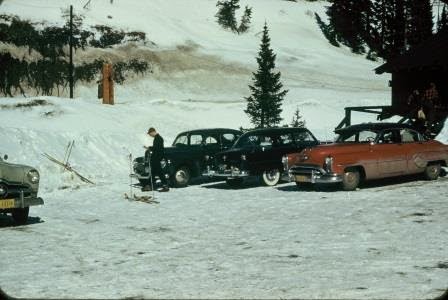 Posted by Rita Schmidt Martin at 6:00 AM No comments:

Faces From the Past -- A Picnic in Kiowa County 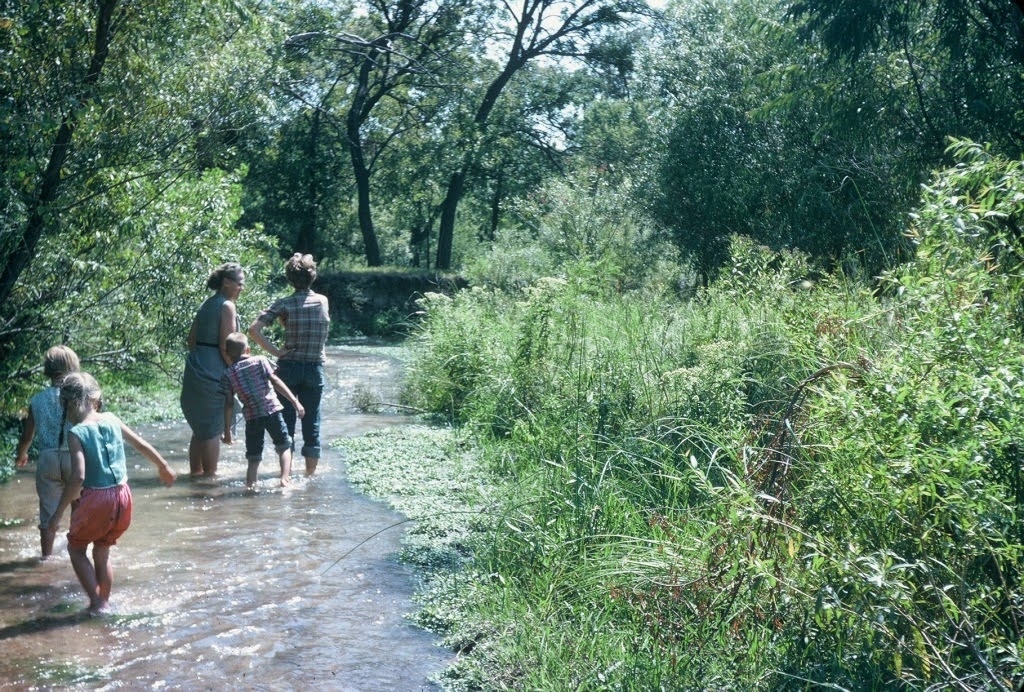 Once when I was very young, my grandmother, Beatrice Schmidt, and her sisters, Vi Dirks and Edna Schmidt, decided we should all go on a picnic out in the field near where they grew up. The group included those three and my Aunt Judi, my mom, my sister, Nancy, my brother, Arlin and I. We walked in a shallow creek bed for a good while and I think the reason the whole event sticks with me so well, is because we all found ourselves covered in leeches and had to peel them off of ourselves. Anyway, I found a few old slide photos of that day. My guess is it was the very early 1960s. 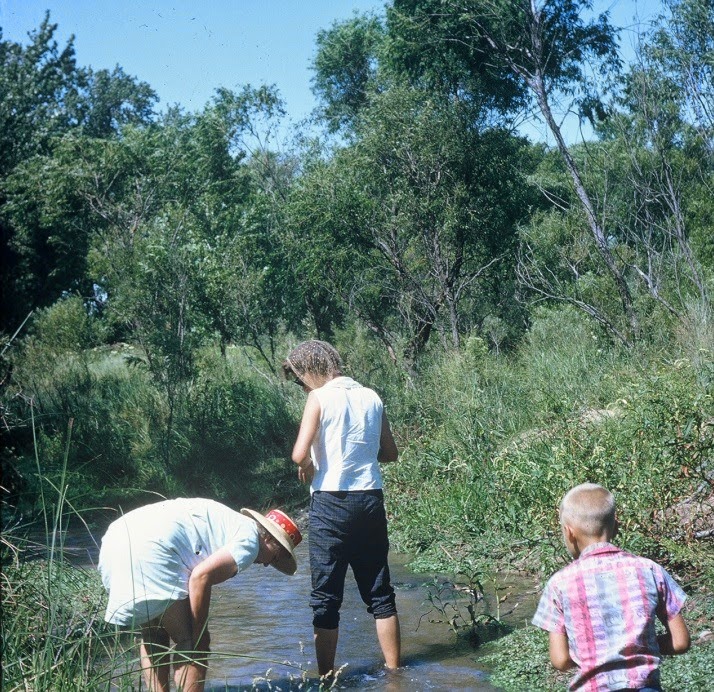 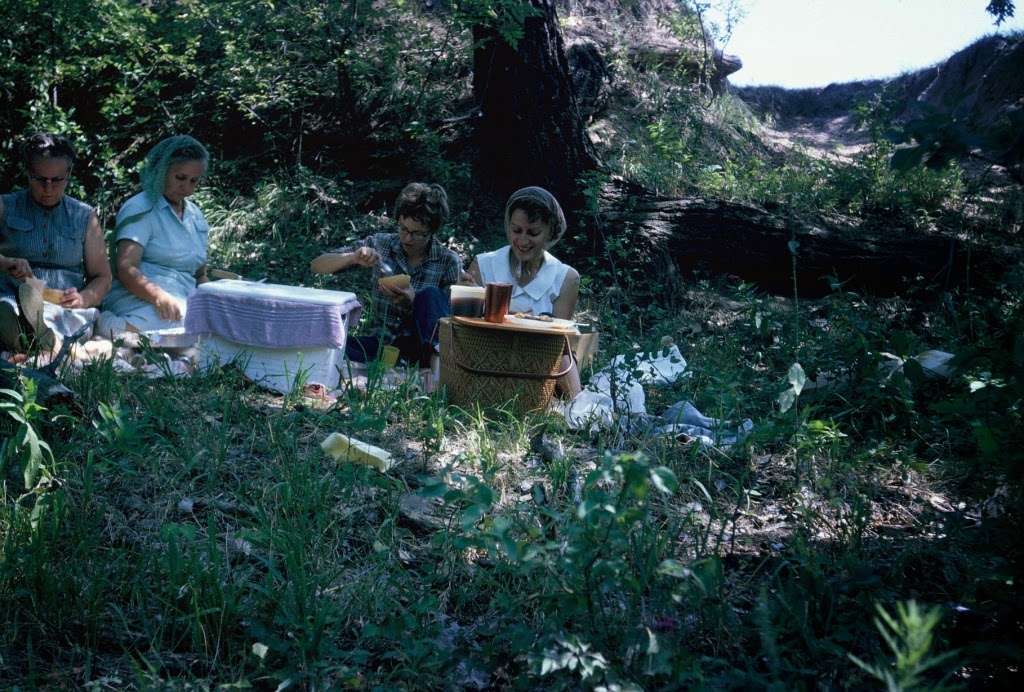 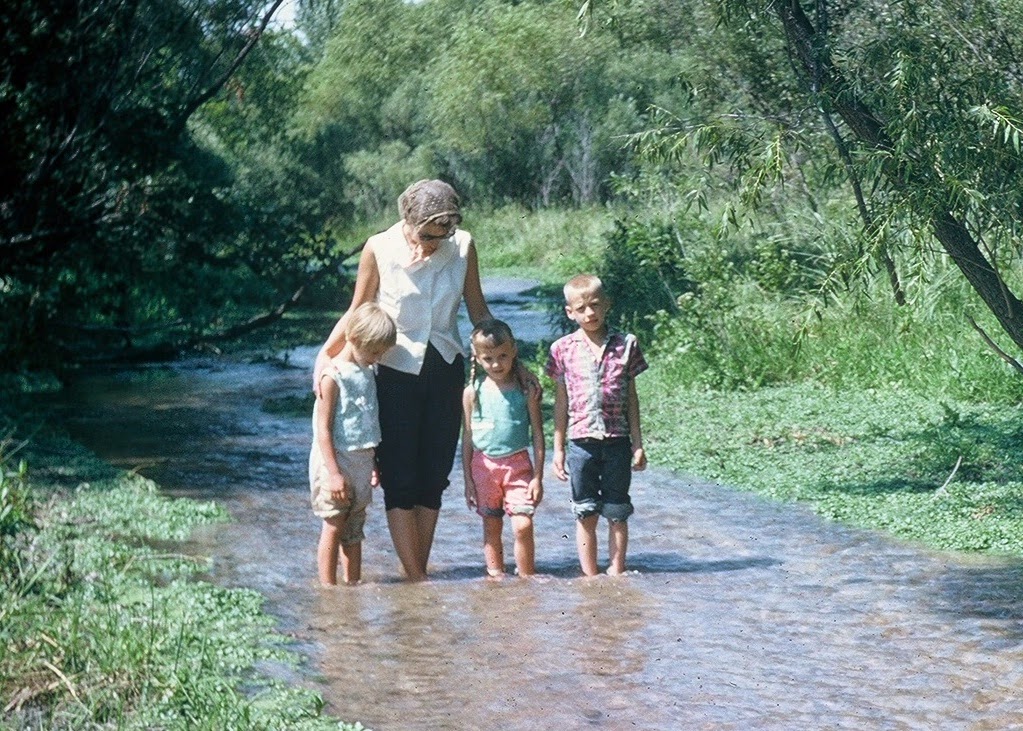 This one is one of my all-time favorite pictures.

Email ThisBlogThis!Share to TwitterShare to FacebookShare to Pinterest
Labels: Faces From the Past, Greensburg, Kansas, Schmidt 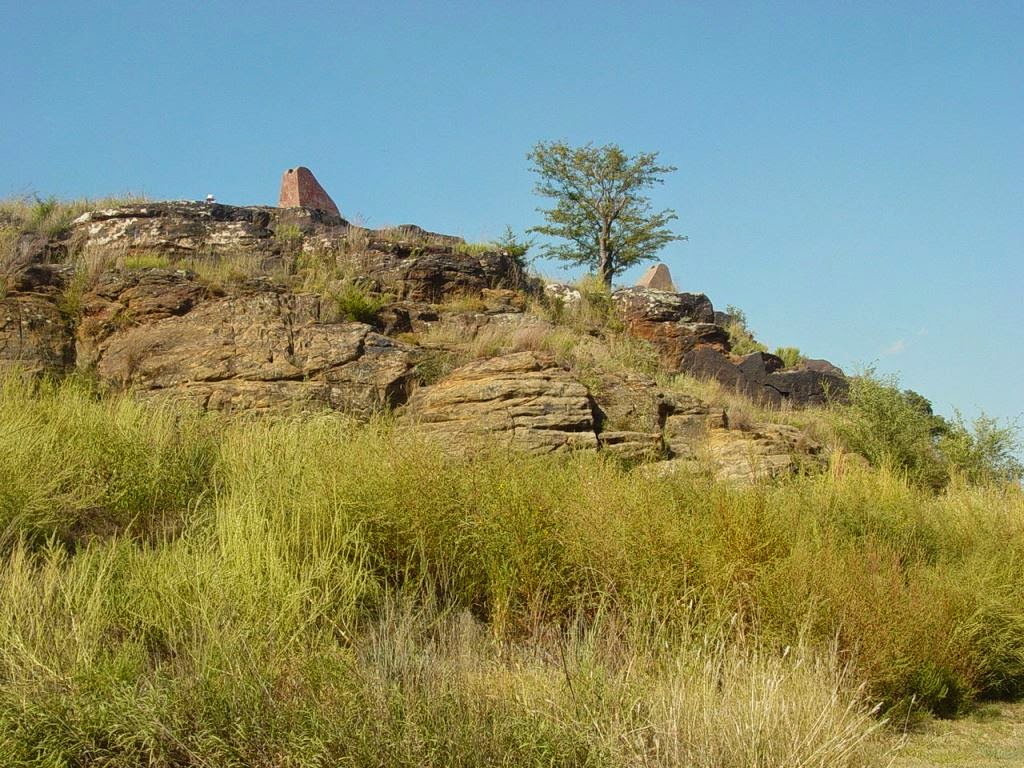 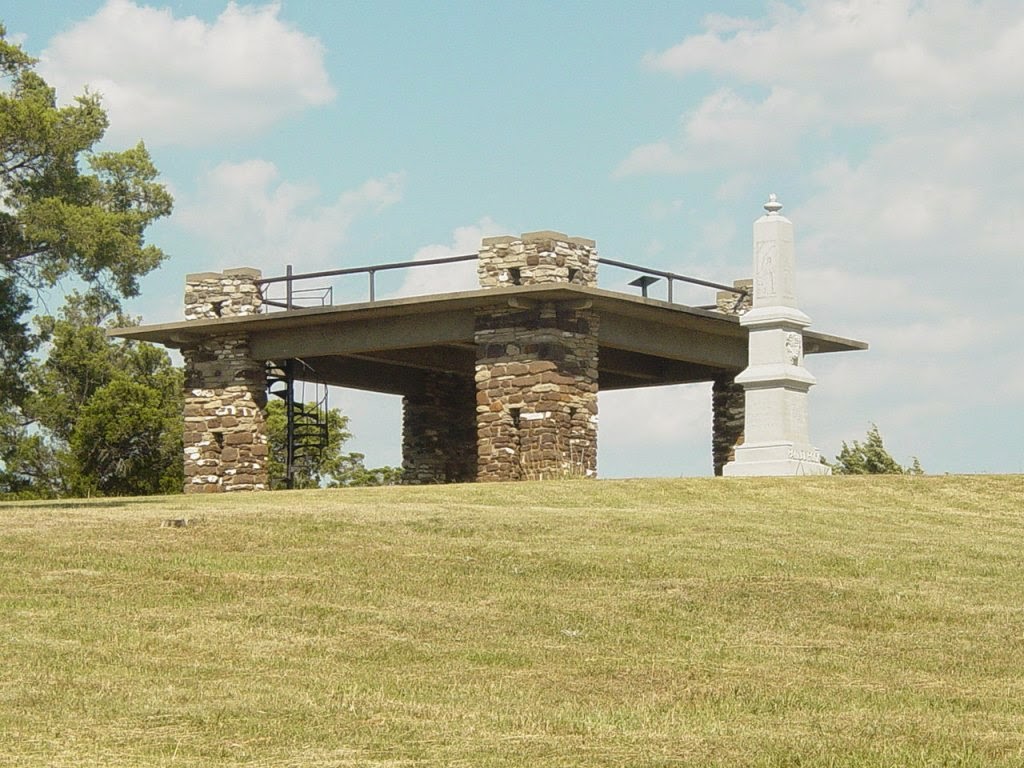 Some time ago I found a really interesting blog. I was googling for an obituary when this blog popped up. It is called "Too Long in the Wind"  and it is part of  Pawnee Rock.org. This blog has years of interesting tidbits about the area of Kansas that many of my ancestors lived in. While I never lived in Pawnee Rock, I have visited there on numerous occasions and have visited the cemeteries and taken many photographs. (see Find A Grave for my contributions in Barton County, Kansas).

The Mennonite settlement near Pawnee Rock has long been a part of my research and I've found I have a connection to almost everyone in the Bergthal and the Dundee Cemeteries.

This blog, by the website creator Leon Unruh, is both historical and contemporary and makes the community come alive. He links to other articles and obituaries and adds comments and stories for the people and places he is familiar with.  He includes photos - old and new and often includes letters and emails from other people. He talks about the town and how it has changed over the years. And of course he blogged about the Bergthal Mennonite Church closing.

The whole Pawnee Rock website is interesting and they even have scanned the entire 1950 yearbook from the high school!

Perhaps such a blog exists for your family's town! It is worth searching for. And if not, maybe it would be a great blog to start!

Thanks, Leon, for bring Pawnee Rock, Kansas to life for me.
Posted by Rita Schmidt Martin at 7:30 AM No comments:

The Mennonite Relief Sale in Hutchinson at the State Fair Grounds has been a part of my family for many, many years. I remember going when the auction was in the old sale barn. My grandparents, Beatrice and Harvey Schmidt, were almost always there. It was a time to see people from all around the state and even outside the state that you hadn't seen in awhile.

The sale is a charity sale - with all proceeds going to MCC - the missions branch of the Mennonite churches. There was always a quilt auction with quilts made and donated by churches and individuals. Plenty of other things get auctioned off as well, but the quilt auction has been a big draw for some time. But maybe even more of a draw than the quilts, is the food. Because, while not everyone can afford to bid on a quilt, everyone can enjoy the food. 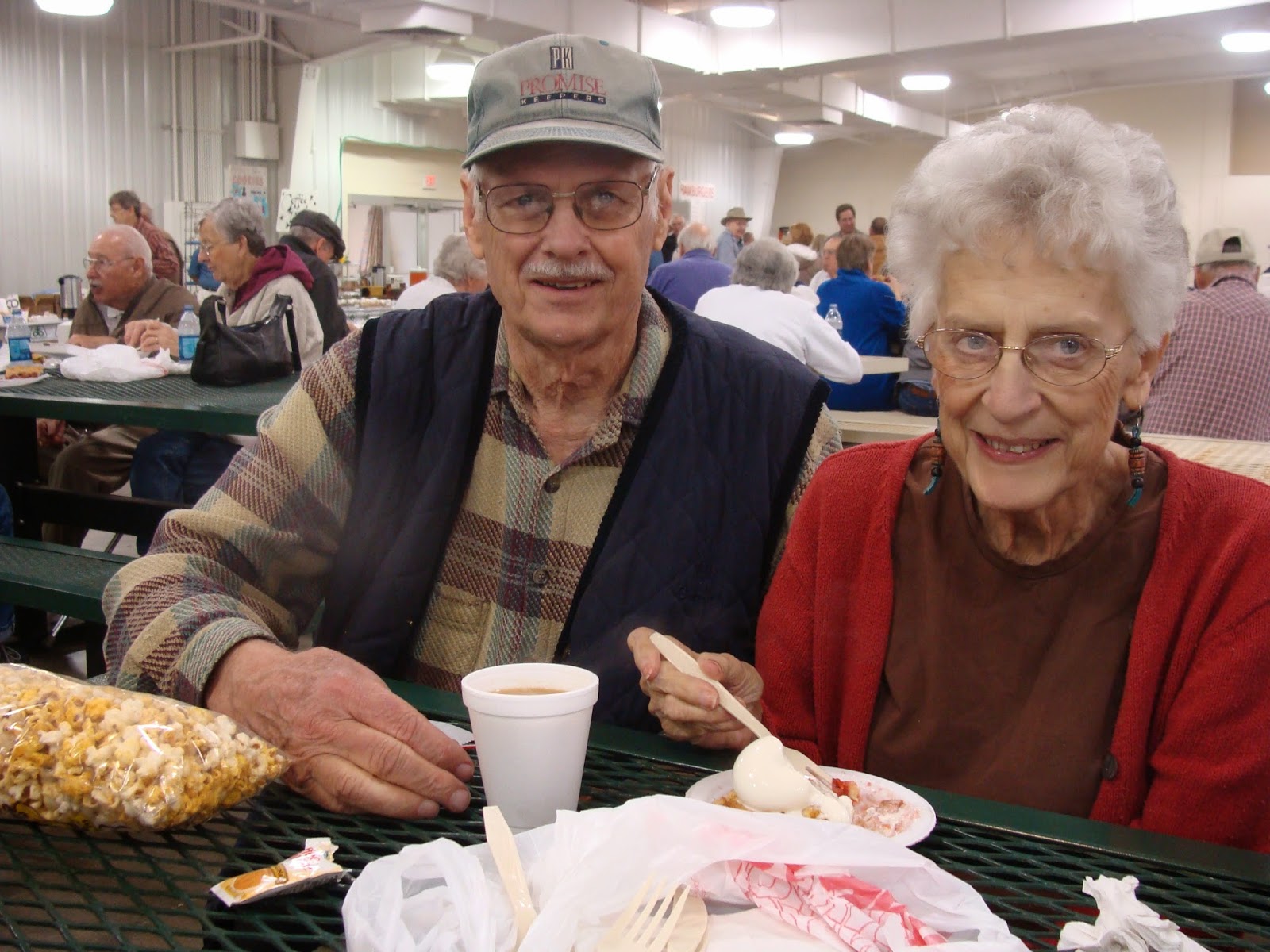 We attended and enjoyed the sale during the years my grandparents were alive, but after they died, the sale took on a new meaning. My dad had worked out an agreement with his dad, Harvey, regarding the years and acres of accumulation of stuff. Grandpa Harvey loved auctions and there was more than a little stuff piled up on his farm. Someday I'll write more about that.

But for now, it is enough to say that Dad and Grandpa came to an agreement that what the family did not want, could be sold at auction with the proceeds going to MCC. So after Grandpa died, Dad took on the project of taking several trailer loads of stuff to the MCC sale in Hutchinson every year and selling it. Dad was fondly known as the "junk man" at the sale and people looked for him and his stuff every year. 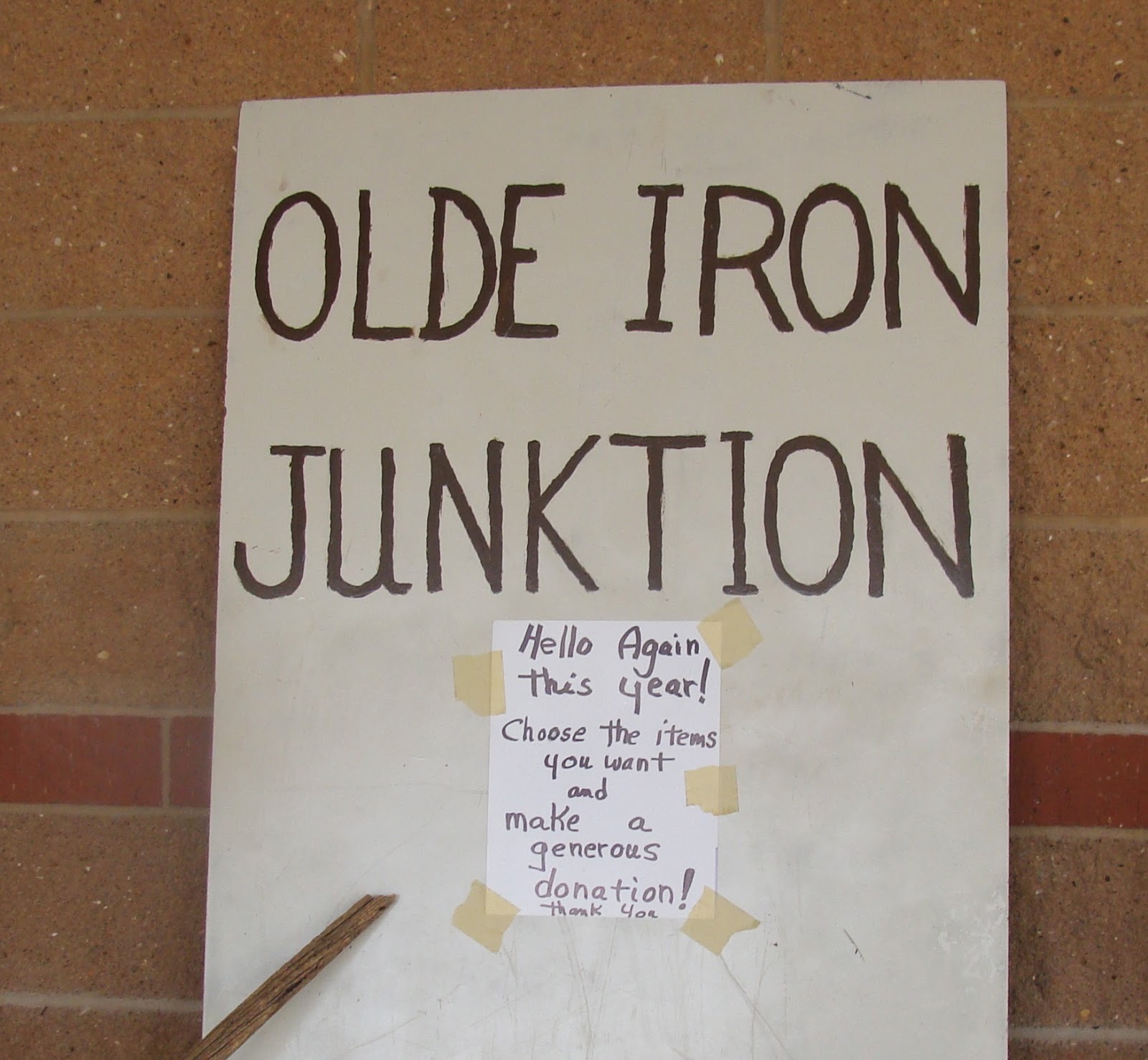 He sold old tools, wheelbarrows, buckets, wagons, tractor seats, pumps, jacks . . .the list goes on and on. Any number of things in just about any condition. Many people used these rusty items as yard art. Occasionally someone would find something they'd been looking for - a particularly collectible tool or hood ornament. 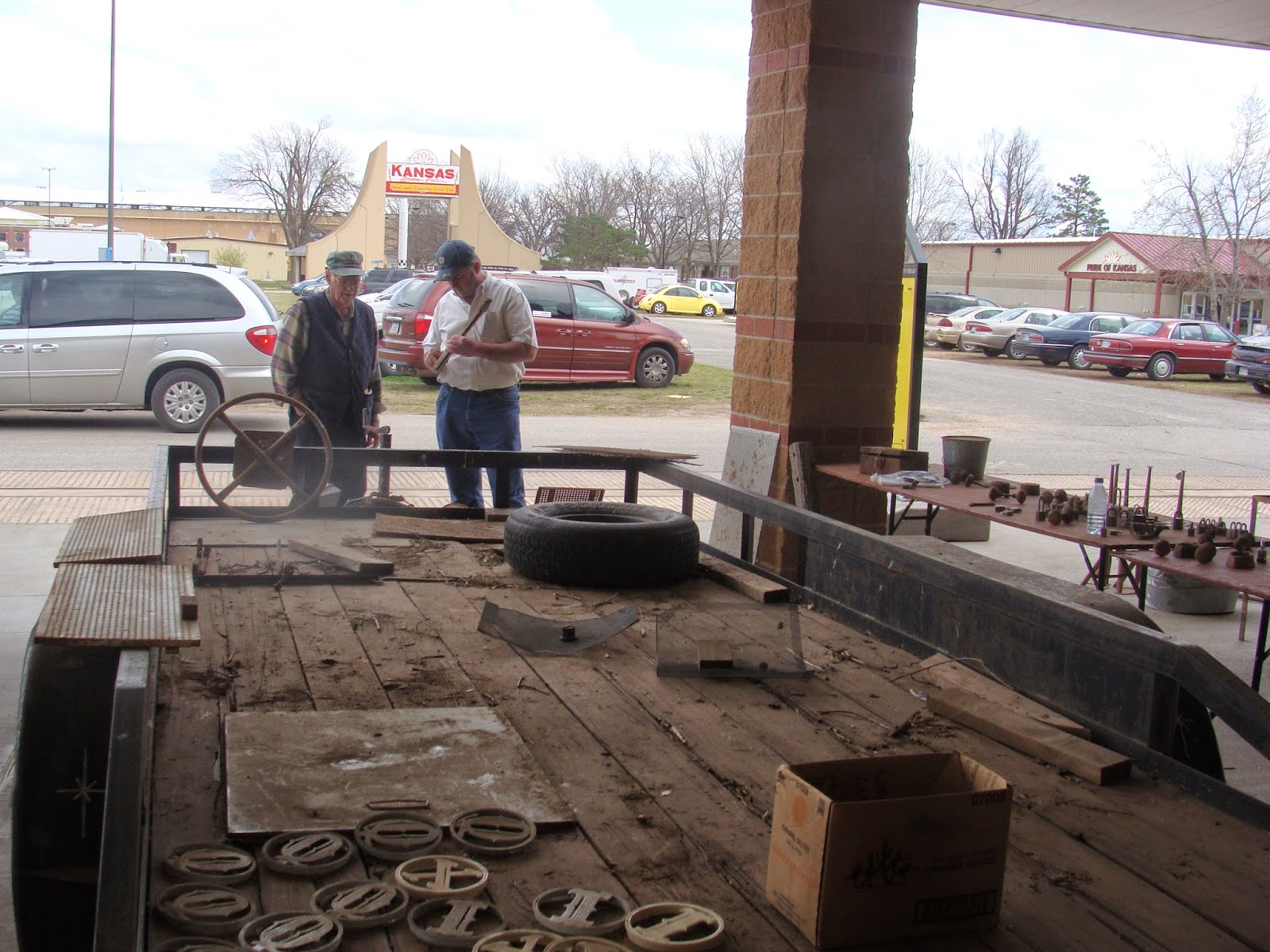 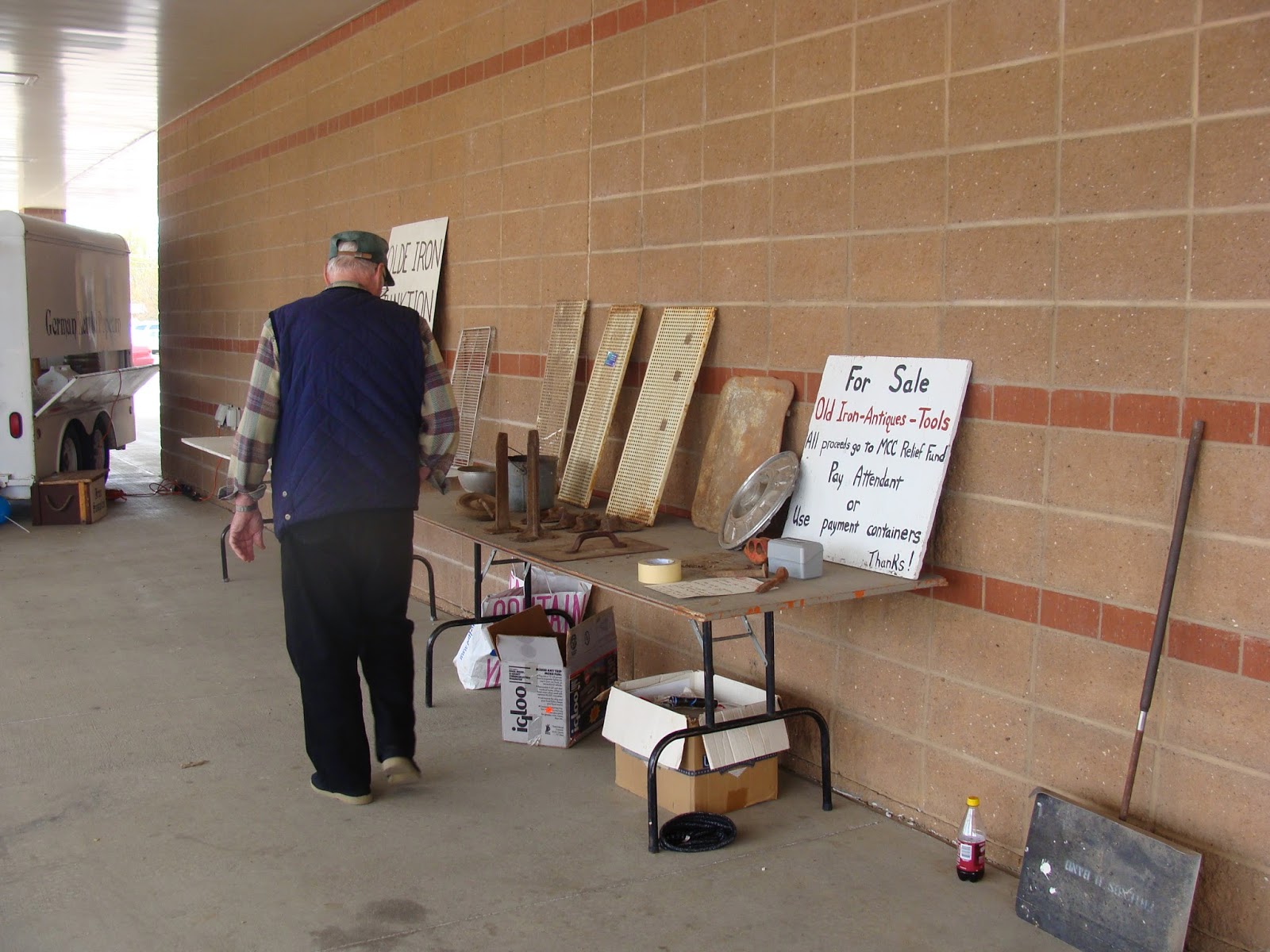 These pictures were taken in some of the last years and by the looks of it, they were taken at the end of the two-day sale. 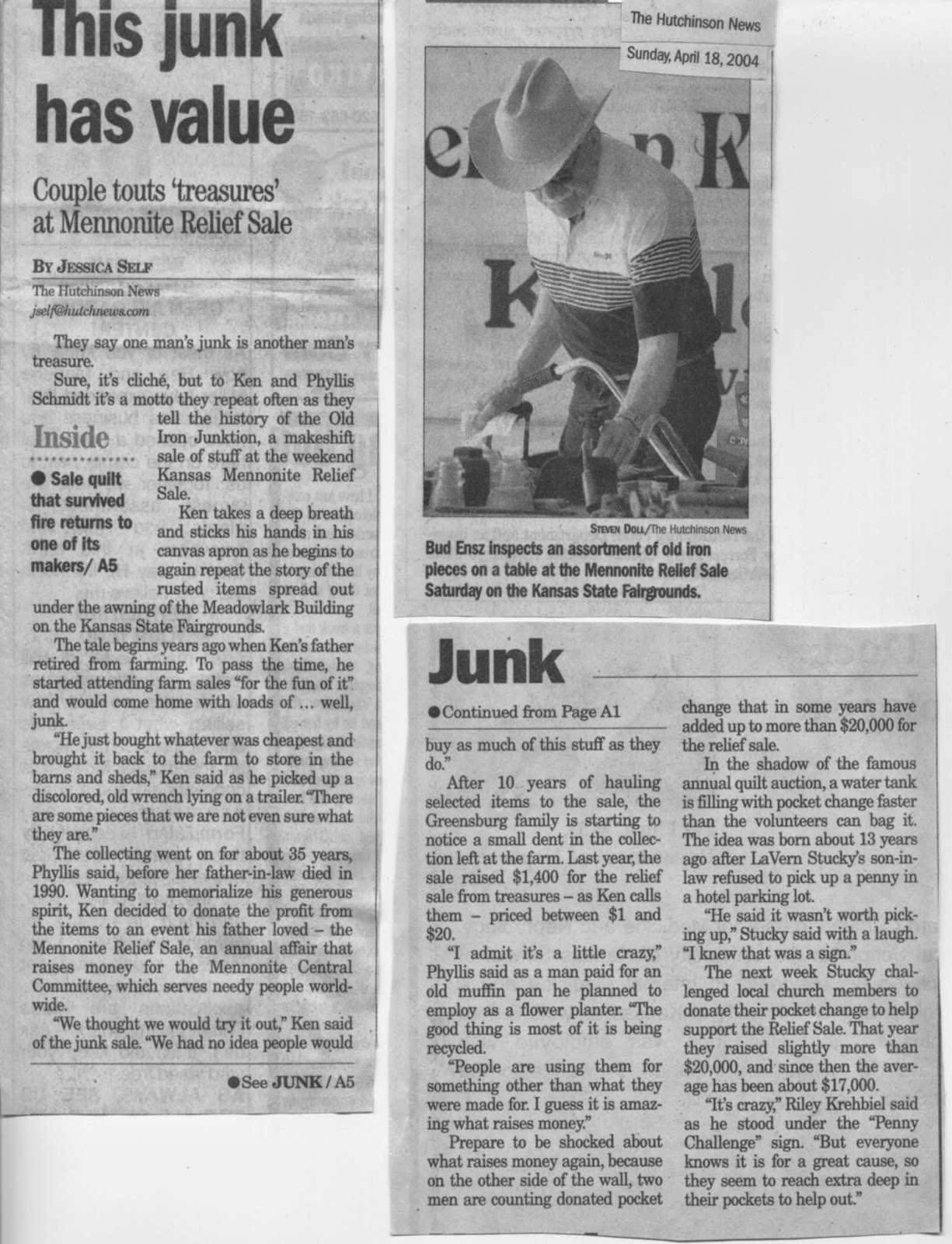 One year they made the news in the Hutchinson paper's coverage of the sale.

The sale was always a great place for family from all over the country to meet up and have fun. There are lots more stories and pictures from years of going to sales but I'll save those for another time.

Posted by Rita Schmidt Martin at 7:30 AM No comments: